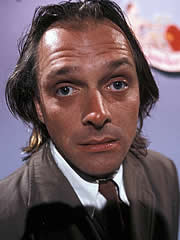 I was genuinely saddened to hear of Rik Mayall’s passing. Normally when you hear news of a celebrity death, someone you never really knew in person, you’re reminded of the things they did, and there’s a general sadness or loss that’s associated with that, sadness that we’ve lost this person and their performances. But most of the time, for me, it’s not an emotional connection, it’s connection with what I knew of them. With Rik Mayall, I felt actual, human loss. It was very much like someone I’d known was gone. In a way, Mayall was someone I grew up with.

Like most people around my age, I grew up watching ‘The Young Ones’ and ‘Bottom’. I remember when we discovered ‘Bottom’, airing late at night on ABC. It was the most amazing thing – us barely teenage boys couldn’t believe what we were seeing. I watched it on a black and white TV, about as big as a microwave, and I’d have to fiddle round with the rabbit ears to get good reception (there was always be a point where it’d come through perfect, then as soon as you let go of the aerial, it’d go fuzzy – I think I actually watched a couple of episodes with metal in hand, angled just so). The Young Ones was truly ahead of it’s time, some of the jokes in that show pre-date the random moments that The Simpsons later became renowned for, and they’re still brilliant to this day (‘Travel Scrabble, Death?), but it took me a while to truly appreciate that show, which is why I probably gravitated to ‘Bottom’ more. I remember one of my birthdays, when a friend of mine gave me the ‘Bottom Live’ DVD. They swore. They made mistakes. They cracked themselves up. It was fantastic.

Rik Mayall was one of those rare talents that stole your attention in every scene he was in. I can’t remember any appearance of Mayall where any other actor got a look in. He dominated the screen, took over, and you just wanted to know what his character would do next. He made everything else seem less interesting, his characters always larger than life.

I didn’t really expect to hear of him passing. It’d been a while since I’d seen him do anything, but just knowing he was around was comforting. Knowing that he might show up again in some random film or TV show. Seeing him was like seeing your favourite toy from when you were a kid – that excitement came back, that feeling. There he was. And now he’s gone.

Rik Mayall was creative, intelligent, stupid, hilarious, an over-actor, an annoying twat, a cunning villain, an inspiring hero, a unique genius, and above all, a man who reminded us that you can’t take life too seriously.

When he was in the frame, he made everything else seem less interesting. Without him in the world, everything kind of is.

One day I wrote a fictional article about my attempts to win a Logie Award. The article was about Day One of a campaign I was going to run:

‘My name is Andrew Hutchinson. I want to win a Logie Award. I have no television experience or actual acting ability. I have however, discovered a loop hole in the Logie Awards process which stipulates that they are based on public opinion, not ability (like we didn’t know that already), so my plan is to campaign for a Logie election-style, get the people behind me and triumph over the well and not so well known names of the Australian small screen. “But Andrew”, I hear you say, “why would people vote for you? How will you garner these pledges, get people to join your cause? How do you have the time to waste on this?”

Everyone has a dream, and I believe the people of Australia want a real person to win, a genuine no-namer. An underdog. And I plan to do ANYTHING for the votes.‘

You can read the whole article here.

I sent this article to a website I’d come across called Work in Progress, which was run by two creative types looking to publish new work. This fitted into what they were after – a work in progress, so I sent it through. The detail I didn’t clarify, I didn’t note this was fiction. The guys loved it, but they were under the impression that it was real and when they asked me if this really happened, what could I say? ‘Of course it did’.

This lead to more articles (Day Two, Day Three), and, in a pretty big surprise, media coverage – below from The Sydney Morning Herald, including TV Week’s response, published the next day and, bottom right, a piece from MX: 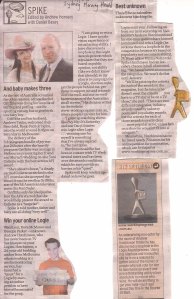 So it got pretty big, pretty quick and I started to get nervous, because none of this stuff was actually happening. The website set up a contact form where people could put down a challenge for me to do to win their Logie votes and we had a heap of people sign up. I was interviewed on several radio shows, I got onto the Logies ‘Black List’ (after the newspaper article in the SMH, TV Week contacted them (in image above) and told them I didn’t have an ice cube’s chance in hell of winning and were, apparently, pretty annoyed that I was making a mockery of their Awards – see ‘Conversations with TV Week’), things were all moving quick. Then the TV guys started calling.

We got a call from a TV producer who wanted to make a comedy show. He said he had a few known comedians keen and wanted to add the Logie Quest, and other comedy work of mine, to the show.  This was pretty amazing, and of course, I was down for anything. Then ABC TV called, leading to the above video. The main issue with this one was now I would actually have to do all these things, for real. I was extremely nervious, a camera crew followed me around Federation Square for hours to get this footage, but it turned out okay. They then took me to the Logie Awards (‘How I Walked the Red Carpet at the TV Week Logie Awards’) – which was hilarious. Because I was on the ‘Black List’, they couldn’t list me as the talent, so I had to be listed as part of the crew, and one of the ABC TV chiefs at the time really didn’t want to upset TV Week, so he was totally against them taking me, so we were on some covert mission, very funny. Very nerve wracking also, but the people I worked with were excellent, Shelley Horton and Edwina  Throsby were both great.

After the TV show, I kept going back and forth with the producer about the comedy show for a while, then he moved to the US to work on a kids show and by that time it was a few months later and the initial buzz was gone. I also wanted to write serious fiction and was concerned that if I kept doing this it might hurt my reputation and work against that, so I just stopped. The website closed down about a year later, I never heard anything else from the producer. Then it was a just a cool story about that time I went to the Logie Awards and got on TV for being an idiot. And this picture of me standing outside Flinder’s Street Station in my underpants.

Here it comes – we’re nearing year’s end so get ready to see list after list of top tens. Rather than fight it, I’m going with it (though I’ll only go five to save you from fatigue) – here are some of the best films I saw in 2013:

I’ve written about Mud briefly here, but definitely Mud was my favourite film of the year. It was released in 2012, but only made it to Australia in 2013, so I’m counting it. For people who think traditional film storytelling is being pummelled into submission by visual effects, a never-ending number sequels and movies based on board games, you should check this out. McConaughey is great in this.

The most tense, gripping film I’ve seen this year was Prisoners. The story was clever and compelling, forcing the viewer to question not only which character was behind the crime, but what lengths would be acceptable to obtain the answer (reminded me of the also excellent ‘Unthinkable‘ which is definitely one to check out also). Jake Gyllenhaal and Hugh Jackman are so good in this movie – Jackman’s best performance ever, in my opinion (yeah, he is Wolverine, but in a dramatic sense, this is a better performance).

3. The Kings of Summer

So good. I’d read some of the buzz about this film and it definitely lives up to everything promised. As a comedy, it’s pitch perfect and the dramatic elements are weaved through, so you’re not quite sure which way it’s going till the conclusion. The lead actor, Nick Robinson, is someone we’re going to see a lot more of in future films, no doubt.

I only saw this recently, but it’s right up there with the best things I’ve seen for the year. Going in, I wondered whether they would be able to sustain the tension of a whole film (as this is based on a true story), and early on I had my doubts (Tom Hank’s accent seemed odd in the first scenes and the pace takes a moment to kick in), but it’s an amazingly well done film. Director Paul Greengrass knows momentum and story has become such a good film-maker. Captain Phillips continuously raised the stakes as the film moves along and Hanks gets better and better, till the final scenes, where he delivers five minutes of pure acting brilliance.

When I head Pixar were doing another ‘Monsters’ film, I thought they might be coming off the rails. ‘Brave’ was good, but not up to their usual brilliant standards and ‘Wreck it Ralph’ the same, entertaining, but just some flaws that you usually wouldn’t get from the perfectionists at Pixar (note: a reader has corrected me on this, Wreck-it-Ralph is not Pixar). The first time I saw Monsters Inc, I thought it was okay, but in subsequent viewings (I have two young kids, I’ve watched it a lot) I’ve come to really like it. Even if you stop seeing it as a Monsters film, as a college film, it’s right up there with the best. And I loved the message in the end, that life is what you make of it. Great film.