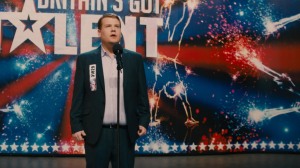 I recently watched the film ‘One Chance’, a film based on the life of British mobile phone salesman turned opera star Paul Potts. If you’re not aware of who Potts is, he won the 2007 iteration of ‘Britain’s Got Talent’ after he blew everyone away with his pitch perfect performances on the show, the first one, in particular, gathering him worldwide attention.

Like Susan Boyle, Potts is a poster-child for the talent show format – an unknown, unrecognised talent plucked from obscurity and given a chance to shine on TV’s biggest stage. There seems to be one of these stories in every season of these shows, and they are great – I challenge anyone to remain unmoved by Potts’ initial performance (above), where the judges had clearly expected way less from this unconfident, overweight and plain-looking gent standing before them. Potts’ rise to fame is probably the most successful transition of it’s kind, given Boyle’s challenges with fame ever since. It’s a great story that deserves to be told, and ‘One Chance’ is a solid film, though not quite as good as it had the potential to be.

The main issue I had with the film was the portrayal was a little too light. That was intended, they wanted to hit as wide a demographic as possible, so it needed to be a feelgood film, but the greatest aspect of Potts’ rise was encapsulated in that first performance – you could see in his body language and the expression on his face, this was a man who’d been kicked one too many times. He’d lost faith in himself, in everything, you could see that he was bracing himself for more anguish. I didn’t feel the film truly captured this, the defeated nature that Potts exhibited – James Corden, who plays Potts, was very good, but he couldn’t quite capture that uncomfortable nature exhibited by Potts in real life. This was the key reason why Potts’ story was so great, because you could see that he’d almost given up – but then he won. It’s a great example of persistence in doing what you love in the face of constant opposition.

But the key message I took from the film was the importance of having support from your loved ones in what you do. All through the film, Potts’ dad is telling him to give up on his dreams of being a singer, to face reality and get on with life like everyone else. There’s a scene where he’s really down, where nothing’s going his way and his wife realises that if he can no longer hold onto the dream of being a performer, that he really sees no point to his life. It’s part of who he is, he needs to do it, needs to hold onto it in some way or he just falls flat, lays on the couch, gives up. I think that’s true in everything – if you’re not true to yourself and not pursuing what you’re passionate about, at least in some form, your life purpose can be eclipsed, and you face a dreary reality of just being, just doing what you have to do. A life of obligation more than exploration of being alive. That’s no way to be, you always need to keep searching for what makes you happy, what drives you as a person, and you need to keep chasing it – sure, there’s certain things you have to accept, and yes, you’ll probably have to work a job that’s not exactly aligned with your dream path, but as long as you continue to pursue your passions in some form, as long as you have the support of people close to you to do that, that’s a big key to maintaining balance. And the moments of clarity you can get from pursuing your dreams make all the effort worthwhile. People should never give up on chasing what it is they’re most passionate about. Everyone has something.

And as a parent, it also underlined to me the need to support your kids in everything they do. If they feel strongly about something, parents need to be supportive, foster it as much as they can. Your mother and father have a profound influence on your psychological make-up, just having them back you, being aware that they’ll be behind you no matter what, it’s such a huge pillar of strength. It can change your life. My parents have always been supportive of me, and while there are certain realities we have to face, I’ve always known they’re behind me and they’ll be there for me, no matter how unrealistic my goals. Knowing that I’ve made them proud at certain times has been one of the most emotionally moving experiences of my life.

Stick with what you love, find that thing that makes you happy, and surround yourself with people who won’t ask ‘why?’, but ‘why not?’. It’s one of the keys to maintaining happiness in life and feeling complete in everything you do.